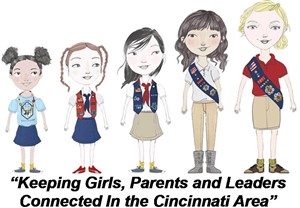 Ray and Linda live out the mission of Kings Servants, LLC ‘Fulfilling the Gospel through Servant Leadership’ with their own family of three adult children and five grandchildren.

Linda doesn’t remember the exact year she began to hear about the ‘cookie trail’ that seemed to be following the ‘culture of death’ but she knew something had to be done to protect our youth. She and Ray were involved with their youngest son in their parish’s Boy Scout Troop and saw firsthand how a youth organization could be used as a fruitful ministry to young people.

In 1995 a ministry to girls, American Heritage Girls, had begun in Linda’s hometown of Cincinnati. It was founded by a group of women who loved the Lord and whose efforts as Girl Scout Leaders to reform troubling matters of faith within that organization were rebuffed. These moms joined together to start a Christ-centered program for their daughter and their friends. It would be one which would guide the girls to grow into women of integrity who loved God, upheld sexual purity, and respected life.

Linda became a registered member of American Heritage Girls in 2004, but when her oldest granddaughter started kindergarten in 2007 Linda became more active in the Troop. That granddaughter is still involved in AHG along with her younger sister who was finally old enough to join in the fall of 2015.

From 2013 to 2016, Linda accepted the volunteer role of Cincinnati Area Coordinator for American Heritage Girls. So in addition to being an active member of her granddaughters’ Troop, she led the Area Ministry Team which provided support for more than twenty-five Troops in the Cincinnati Area. Those Troops are comprised of five hundred volunteers who deliver the American Heritage Program to over one thousand girls.

From 2017 to present, Linda stepped in as Troop Coordinator of Troop OH0128 to help mentor both girls and women to be better servant leaders in the both the ministry of American Heritage Girls and all who they touch in their everyday lives.

Linda challenges other grandmothers to look for opportunities to help their granddaughters and other young girls in their parish accept the mission of American Heritage Girls, to build ‘women of integrity’ through this pro-life ministry..

To find out more about American Heritage Girls visit www.americanheritagegirls.org